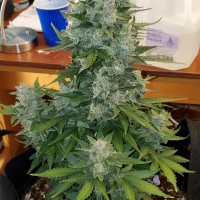 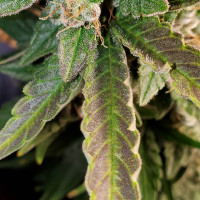 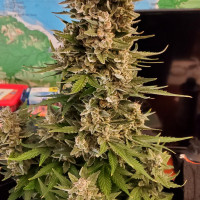 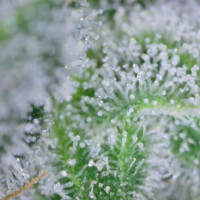 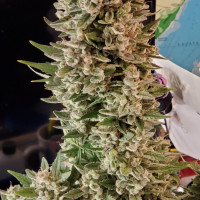 1/9/22 Day 62 - I believe she is working on finishing up. Her buds continue to swell, and she is still putting out some new pistils. Her water use has slowed way down and the buds are changing color all over now, not just at the very top. I did a test on a tiny budlet yesterday, she got me high, but it was very speedy and head-high only. That's telling me we need some more time. It's so hard to judge with her since she's developed faster than anything I ever expected - two months and she's nearly done? But I'll keep peering closely at those trichomes. Watch her finally start to slow down now that the finish line is in sight. She had a half gallon of pH 6.2 water last night - water was a tiny bit lower pH than the usual 6.5, I must have miscounted my drops of PH Down. (Probably dropped 6 instead of 5 drops.

New setup for the upcoming 3 LSD Auto grow is nearly done, Pot for Pots are chilling in the big tent, waiting out their time before the new seeds get dropped. Final step before planting: move the air filter to the new tent, hanging it above the light. My new light puts out some major heat at full blast - though I'm unlikely to ever need it at 100%.

Try your hand with these strains